While most people are aware that air travel and car journeys have an enormous impact on climate change due to the release of large volumes of carbon into the atmosphere, less is known about the impact of our digital lives.

Sending emails and visiting websites seem to be intuitively harmless to the environment but the actual impact is quite startling. For example, sending a single email without an attachment can release the equivalent of 4g of carbon. Attach an image and 50g of carbon can be released.

The impact of unnecessary emails

OVO Energy published a study in 2019 on the impact of sending emails. The study found that over 64 million unnecessary emails were sent a day (for example, saying “Thanks!” or “Received.”) and that if each adult in the UK sent one less “thank you” email, 16,433 tonnes of carbon a year would be saved.

So, although the carbon footprint of a single email is quite small, emissions from unnecessary emails in the UK alone equate to 81,152 flights to Madrid.

Websites have come a long way since the early days of the internet; many were just static pages, with text and a few images. With a dial-up internet connection, web pages had to be small or they would have taken an age to load. However, with the development of super-fast broadband, the size of webpages became less of an issue. Video, hi-res images and fancy interactive features became the norm, even for mobile devices. And while web developers considered the impact of page size on page load times, the impact the page had on the environment wasn’t a consideration.

Research estimates that by 2025, the IT industry could use 20% of all electricity produced and emit up to 5.5% of the world’s carbon emissions. That is more emissions than any country except China, India, and the United States.

As a comparison, a new car will release an average of 116g of carbon for every kilometre (km) driven. To put that into context, the website emits an equivalent of:

Here at AB, we have recently refreshed our brand, including the launch of a new website. In the past when designing a new website, there was much we took into consideration: design, usability, accessibility, functionality, security, SEO and page speed were just some of the elements we looked at. Although we have used servers running 100% renewable energy for several years now, the environmental impact of the website itself wasn’t part of the design phase. However, with our new website, environmental impact was considered at the outset.

Our new website was built using our own in-house WordPress setup (we’ve nicknamed this Richmond). Designed from the ground up to be as efficient as possible, Richmond works by only loading modules and resources that are actually required by the website, saving data and reducing page loading time.

Images and videos for the website were scrutinised to ensure they actually added to the user experience on the page. They were also optimised and static images were converted to the new modern format WebP that that provides superior lossless and lossy compression for images on the web.

System fonts were chosen where possible to reduce the need to download additional fonts. Additionally, by using Cloudflare (which we recommend all our clients use for both security and page speed benefits), we make use of Content Delivery Networks (CDNs) and server caching to reduce the amount of data required to be downloaded on each visit.

There’s a separate optimised theme applied when viewing our website on a mobile device. This includes displaying static images rather than video and reduced code as certain interactive features have been removed to speed up the user journey through the site content. 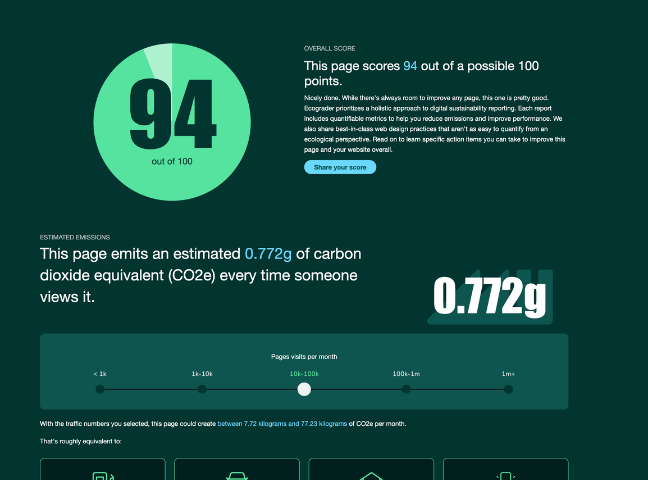 All of this upfront work paid off. Using a bespoke design, our new website is both visually engaging and user friendly, while also being as environmentally sound as we can make it. Using the Ecograder tool, our new site scores 94%, a score we are very proud of.

As with SEO, building low carbon websites can be a balancing act between a design lead approach and optimisation but we’ve shown we can deliver on multiple fronts.

When we come to design and build your website, all of the techniques we have used to build a more environmentally friendly website will be employed to deliver a site you can truly be proud of.

Please get in touch to see how we can help you.

Find out more about our web services

Find out how data and technology have been game changers when it comes to judging the world's finest cheeses.

Read more
How technology has transformed the World Cheese Awards

Is siloed data impacting your business? In our latest blog post, our Development Manager, Jimmy Phillips, explains just how harmful it can be.

Read more
What’s the cost of data fragmentation to your business?

Tis the season to plan for 2023. To start the new year with a bang, your business needs to have a plan in place. See our top planning tips.

We love to talk branding and marketing! Get in touch with us today.